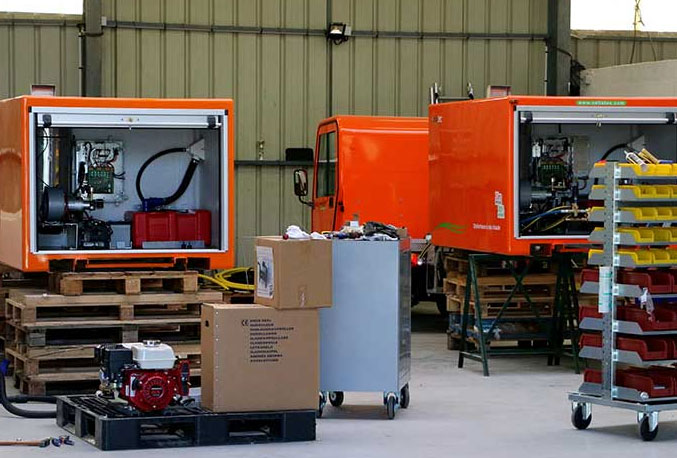 OELIATEC is located in Brittany, (Ille-et-Vilaine), based in Saint-Jacques de la Lande, very close to Rennes, produces machines for weeding management with hot water. Created in 2010, OELIATEC is the leader in France and in Europe for alternative and ecological weeding technology using hot water.

Born following new restrictions on pesticides in Brittany, the firm grews strongly, thanks to the law prohibiting public communities of use of chimicals in weeding management. This law will enter into force in January 2017.

OELIATEC brings real solutions through an ecological, silent, user friendly and economic way to manage an effective weeding. Its technology based on hot water can use rain or basin water.

Today the success of OELIATEC is built on a performing patented technology, on a reactive R & D team and on a selected dealers network. OELIATEC works as well at international level while continuously seeking to improve the efficiency of it’s weed killer machines, by adding new functions like geolocalization.

OELIATEC was born facing an environmental problematic bound to the progressive prohibition of use of chemical weed killers, the region of Brittany being a precursor in the matter in the hexagon.

The users are surprised by the efficiency of the method and by the good results which convinced them. They became the first buyers, that’s how the weeding machines business started.

2012 : OELIATEC expended with innovations. The enterprise increased in a short time, let its technology be patented, provided a research office and in the same time distributors network is spreading in France and in Europe.

2014 is the year of the consecration with the SALON VERT awards for the MOLLEN machine.

Steadily widening since its creation, OELIATEC is present at the European level on rigorous markets like Belgium or Germany.

We offer you a virtual tour of our factory on a dedicated web page that you can visit here: Oeliatec factory.

« After several months of reflection, research and demonstrations, we have chosen to Oéliatec, especiqlly the Belle-île model, for its versatility and ease of use. This type of weeding with hot water, uses less fuel for the boiler also allows the use of rainwater which is an added bonus for communities who wish to invest in environmental protection and natural resources. The design of the streamlined trailer is also counted in this choice because it is part of the image of the community.»

« Recently we equipped BREHAT model from Oeliatec. This technology has allowed us to use half time of the initial passage with a very interesting and immediate result. After 4 years of experience Zero Pesticide, we find that the hot water is really an interesting alternative; it reduces the number of annual passage.

Oéliatec have really met our expectations. »